It’s a special kind of awful, guilty pleasure to sit in a warm truck on a chilly morning. The kids are out there working the gates, huddled against the cold, Carhartt hoods pulled loosely over heads, chins dipped into sweaters, gloved hands burrowed deep into pockets. But the Boss – the King – sits high in his chariot, sipping his hot chocolate, patient and oblivious to all the suffering going on around him. You don’t get that stately feeling sitting in a ’73 Ford pickup. The low ground clearance, rickety heater, wispy-thin steering wheel, questionable door weatherstripping, and grand total of one audible radio station are not conducive. But over the ensuing 40 some-odd years the truck makers figured out how to manufacture it. Panoramic windows, oversized wheels, knobby controls, satellite radio, plush seating, dinner-tray-sized touch screens, and blessed, sweet-blessed heated seats. What passes for state-of-the-art has gone from a $5,000 MSRP business to a $50,000 MSRP business. It pays handsomely to figure this kind of stuff out. 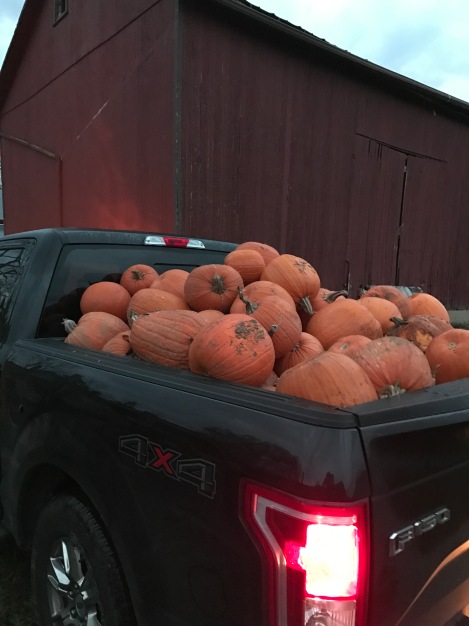 The previous night I had dropped the kids off at swim practice and drove the winding country roads to a remote, darkened pumpkin patch where a local farmer was selling unharvested pumpkins cheap. $20 a load, “as many as you can fit in your truck.”

So I stacked them up as high as physics would allow, strategically walling and wedging them like a roadtrip-bound father of 9 Tetrising provisions into the back of a too-small van cargohold, roughly 130 in total, minus the few that fell out on the drive back towards the pool. That same load of pumpkins sold just before Halloween might’ve fetched $1,000, but they were mine for less than the cost of one 50-pound bag of organic hog feed. The prize pumpkins that retailed for $8 were now being practically given away, subject to the same brutal laws of spoilage economics as those truckloads of “Cleveland Indians 2016 World Series Champions” t-shirts.

Our errand on that cold morning was to wind the truck through our increasingly complex tangle of portable electric fencing, gates, woodpiles, animal shelters, and accumulated farm equipment, tossing pumpkins to the livestock.  We first pitched to the sheep, then around to the cattle, then finally back to the pigs.

A ripe 20-pound pumpkin tossed 10 feet in the air makes an unbelievably satisfying thumping sound when it hits partially frozen ground.  What’s even more satisfying is when it hits, breaks into two bowl-shaped hemispheres, and then a pair of ravenous pigs swoop in to gorge on the guts, slop, and seed. It’s like busting a piñata, sending it splintering to the ground, bursting with candy and goodies, and then watching as all you-know-what breaks loose. The collective pumpkin slop zeal in a pack of pigs is about equal in amplitude to the collective candy zeal in a birthday party of 6-year-olds. If not greater.

We took turns launching pumpkins into the pigs from the truck bed. Like working the medicine ball, it was decent exercise. We kept an unofficial tally, awarding points for accuracy, arc, style, form, and above all results. The winning shot was a smaller basketball-sized orb underhanded 20 feet high into the air, steep-angled in and split open laser-precisely on the bed of straw fronting the corrugated pig hut, executed with impeccable follow through and a remarkable degree of early-morning panache.

Then we sat awhile watching the pig party, the chomping, the squealing, the jostling, the nipping, the lip-smacking, the contented joy. At a typical 4-to-1 feed conversion, the pigs will turn all those pumpkins into a not-insignificant amount of pork in the coming days. They say you are what you eat. Here’s hoping for a pleasant pumpkin spice patina in the December pork chops.

But more than just the added meat, this load will keep them occupied, entertained, busy, happy. When they’ve devoured their daily fill they’ll retire to their hut and flop down deep into straw beds exhausted and ready for that special brand of earned, contented sleep, no different than the kids after swim practice.