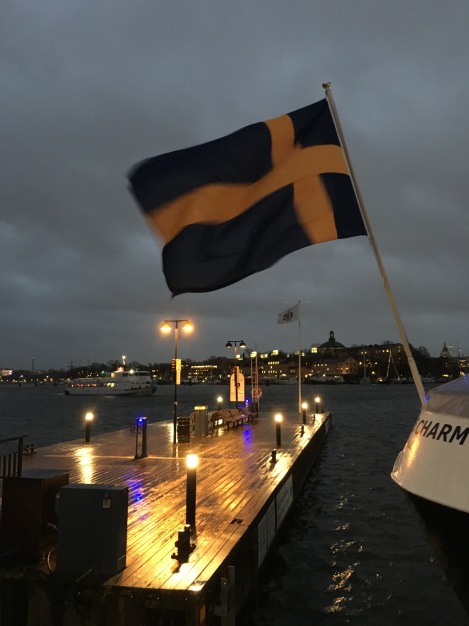 About 20 kilometers into our nine-day traverse through Sweden I had finally had enough. “Have you ever seen roads like this?” I asked Alison incredulously, “they are so smooth, so perfect.” Then after a few seconds of silence, “honestly, they are like one continuous strip of baby bottom.”

Lately I’ve been running the back roads around our home in Michigan and have gotten an intimate look at something I’ve always suspected: the roads here are terrible. To take my mind off the pain and sweat I play a game called “Name that Pothole After the Place on the Map It Most Resembles.” There’s a big blocky one I call “Poland,” another elongated S-shaped one that looks a lot like Vietnam, and another that is a spitting image of India, especially after a light rain when the adjacent deeper “Bay of Bengal” hole puddles up.

I’ve always had something of a fascination for maps, but even for a geography nut like me it is hard to keep up with the changing streetscape. It’s a sign of these dangerous geopolitical times that the holes are only getting bigger. Last week I noticed a chunk loosening to the south of Poland, and by the time I got back from a trip to Dallas a couple days later the annexation of Slovakia was complete.

By day seven in Sweden I still had not seen so much as a scratch on the roadways. We crossed varied terrain and topography, experienced freezing and thawing, plowed through snow and sunshine, and yet, after 1,400 kilometers of driving and another 50 of walking, had not seen one blemish. It was mystifying. By then I had seen enough of the castles, minimalist Lutheran churches, wooded waterscapes, charming red cottages, bustling shopping districts, culinary hotspots, and gleaming modern cityscapes – I just wanted to see a pothole.

Needless to say, Alison had other, more aspirational objectives for the stretch run of the trip. I sensed my quest was putting a strain on our relationship. And that’s why I kept my gushing thoughts about Swedish road signage to myself.

Seriously, it was a wonder every bit as puzzling as that of the missing potholes. You couldn’t get lost in Sweden if you tried. Every intersection was dutifully marked, every roundabout a study in consistency, as intuitive and easy as an iPad. Say what you want about Ikea craftsmanship – and as someone who once snapped a Karlstad sectional sofa in half by simply sitting on it believe me I have plenty to say about it – but the Swedes build some of the best road signage I’ve ever laid eyes on, enough to make me proud once again to call it my ancestral homeland.

Other bits of minutiae caused me considerable alarm but I kept those largely to myself too.

Sweden is woefully, blissfully, beautifully, refreshingly under-retailed (though this mostly applies to the countryside because I counted more than 3,000 H&M stores in Stockholm proper). I spent several days wondering where the farmers bought baling twine, especially in a pinch, which to be honest is really the only time you ever really think about buying baling twine. In America we have Tractor Supply or any one of the thousands of John Deere dealerships, but I didn’t see any evidence of that in Sweden. And what about paint? We passed thousands of country homes, all beautifully, painstakingly maintained in brilliant yellows, whites, and iconic reds. The Swedes must spend a fortune on paint, but I didn’t see a single paint store there either.

These are the types of questions I pondered as Alison drifted off to sleep in the passenger seat. The buttery roads, and responsive (and safe!) Volvo handling made for especially sound sleeping and so I had a lot of time to try to work these things out.

To stay awake I turned to local radio. As far as I am concerned, the French Canadians have the best per capita radio dial in the world with something for every taste. You like African hip-hop? Quebec has a station for that. Euro-techno-pop? Check, Montreal has several. Banjo-laced American bluegrass you say? Yep, got it. I was curious to see if the Swedes could match it.

The dial though was utterly clogged with talk shows. I had no idea what they were talking about, but had a feeling it wasn’t much. In a place like Sweden there really isn’t much to talk about. And I mean that in a good way. It’s a place where almost nothing happens. The staples of the U.S. news media are mostly absent: no crime to speak of, no stories of abject, grinding poverty, not much in the way of sports, and with a single-party system Sweden is devoid of political intrigue too. But that didn’t appear to deter the hosts, they kept chatting in their very reserved, somber Swede voices. I couldn’t be sure, but one show seemed to be live coverage of a village funeral. I was really in the mood for something like an English-language show put on by the local road commission board, but I didn’t find anything interesting like that.

On our last day in Stockholm we met up with some friends, a native couple we knew through some dear former neighbors. Alison and Veronica paired off to talk meaty stuff: education, healthcare, fashion, design, and the general availability of organic foods in Sweden. Meanwhile I grilled Anders about paint, baling twine, talk radio, and potholes.

“It is true that in Sweden we are renowned for our roads,” he said in perfect “aw-shucks” English. Then he launched into one of the most elegant two minute treatises about road construction I’ve ever heard. Apparently they dig deep, use only the best stone, lay it down as thick as possible, and throughout the entire process commit to building it to last. It wasn’t intended to be remotely emotional, yet there I sat in the café, a teary-eyed mess of an American. It sounded so lovely, so foreign. I felt so proud to be one-quarter Swedish.

Nine days is a long time to be so far from home. As much of a blast as we were having we missed the kids, we missed real life, we missed our farm. You can imagine my relief when we got back to Detroit Metro Airport, cleared customs, loaded our bags, paid the parking fee, and exited the structure, tired but grateful to be heading home. And not 15 feet later we bounced through a pothole shaped roughly like Kazakhstan.