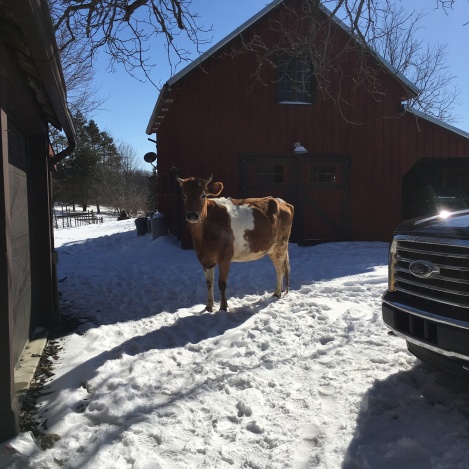 Not supposed to be there

On Saturday morning I walked to the barn through an uncertain dawn, winter easing, the air noticeably softer, the first tentative hints of shirtsleeves and baseball on the face. But you could lose a lot of valuable earthly possessions betting on the weather in Michigan this time of year. By afternoon we might have eight inches of snow, two inches of rain, raquetball-sized hail, 58 and sunny, 15 and biting winds, or all of the above. The weather jocks were reasonably confident in 40 and cloudy, but you take the March reports as more a kindly suggestion than straight gospel.

It takes 2,000 draws at Violet’s udder to get all the milk out. I know this because I’ve counted. And when the number seemed wrong I counted again. 2,000, give or take, every time, enough to put a little sting in the hands and the arms. She’s a first-time freshener, so things are still in flux. Next year we’ll expect more milk. I’m counting on her teats to elongate too, though it may just be wishful thinking. My hands aren’t getting any smaller.

As chores go, milking is one of the best. Like yoga it has meditative qualities, but with a highly-coveted, liquid byproduct. If the temperature is right, the bugs are away, the cow is calm, and the light hits just right milking can do things for you. It’s hard to imagine a man robbing a bank or beating another man to a bloody pulp after watching the sunrise with a cow.

Morning milking also gives you a perfectly valid reason to get your keister out of bed. You can hit the snooze on a lot of early appointments involving other humans – dental work, automotive service, running club – but it’s unconscionable to do that with one of God’s most benevolent creatures. And even if everything else goes wrong the rest of the day – car breaks down, dog pees the floor, home doesn’t appraise, kids make a bad grade, and in response to all of the above you eat three entire sleeves of Girl Scout cookies – morning milking gives you something to hang your hat on. Bring in a couple gallons of milk at dawn and it might be more production than many experience in a full day.

Sometimes, when I’m feeling especially buoyant, I will sing to Violet, but range and repertoire are severely limited, so milking playlists come in handy. She seems to like James Taylor. It feels like there’s more milk in each tug when he sings “The Water is Wide.” It’s just theory at this point, the science still inconclusive.

She’s never spazzed to Beethoven or R.E.M. or Ray Charles, and she generally enjoys American spirituals, but last week she kicked during “Count Your Many Blessings.”

Are you ever burdened with a load of care?

Does the cross seem heavy you are called to bear?

I was brightly singing along about 900 squirts in and not paying as much attention as I ought to have been. She lurched and kicked and by the time I reacted her hoof was ankle deep in a gallon’s worth of warm milk. It could have been pure coincidence, but it’s also entirely possible she does not consider a 280 lb. man flailing away at her business end before sunrise in 12 degree weather as a blessing worthy to be counted. Again, the science is iffy, but there is no more fertile breeding ground for superstitions, old wives’ tales, routine hooey-phooey, and general balderdash than a 19th century farm. So I made a point to strike it from the playlist, just in case.

5 responses to “The Science is Inconclusive”