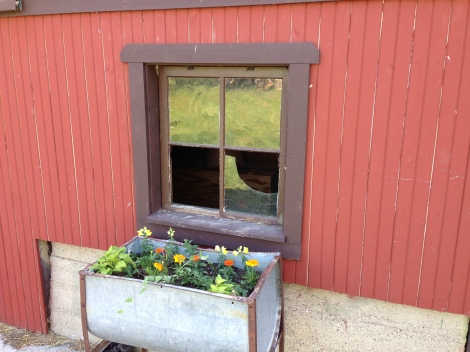 The iPhone alarm sounded at 4:30am and three hours later the MD-88 lifted off from a promising April morning at Detroit Metro Airport.  Seventy minutes of turbulence later it landed in Minneapolis in December.

There aren’t too many places in the world where you can brag about Detroit weather, but Minneapolis is one of them.  As the airplane broke through a cloud ceiling as thick as San Francisco fog I saw the stubborn clumps of white still clinging to shopping center medians and a fresh blanket of flurries blowing in from the northwest.  It felt vaguely like Midwest Christmas.

Back in Michigan temperatures had been in the 70’s for nearly two weeks.  The day before, a brilliant Wednesday, I had excused myself from dinner and evening chores to cut firewood at a neighboring farm.  There I spent my last hours of daylight limbing, bucking, and hauling wood with my faithful Stihl saw and John Deere 2030.

After dark, by the light of the barn, I took to splitting some of my evening haul. A nice evening breeze, carrying a faint hint of baseball and rainstorms, lapped at my shirtsleeves and I worked with earnestness.  Stars gradually appeared, but were muted by the stark white of the moon. The new crop of mosquitoes were all still in mosquito school reading mosquito books about meaty, sweaty men with enough blood in one meaty, sweaty arm to fuel the colony in perpetuity.  I was pushing to split as much as I could before graduation.

I set down the splitting maul to admire the fruits of my evening effort.  It wasn’t much firewood, perhaps a week’s worth of winter warmth. It had a street value of roughly $40 and it wouldn’t do anyone much good until fully-seasoned sometime next year. But it was something.   And, after ten hours in the office and three more in Carhartts, I had finally earned my bedtime.

So I tip-toed across the creaky wooden floor like a jewel thief, around eight slumbering dominoes, each one of them, if toppled, capable of unleashing a spectacular chain reaction. Alison was sound asleep in bed, sandwiched between two sleeping toddlers and two fully-drained sippy cups.  I gave her a two-to-one chance of waking up soaking wet.

As I carefully slid under the covers she sighed, eyes still closed, took a big sleepy yawn, and mumbled that I “smelled like tractor.”

“You mean I smell like work,” I said, continuing toward my wonderfully cool pillow.

“You can’t come to bed like that.  Please go shower.”

For someone half-asleep she was fully-articulate and doubly-firm.  Her level of olfactory awareness raised another, more important question.

“Alison, dear, are you pregnant?”

I walked seven miles of Minneapolis airport terminal to my rental.  The same computers that are now bombarding me with Brooks Brothers and cowboy hat ads are apparently running the show at Hertz too.  Because they keep giving the father of eight kids tricked out Nissan Quests disguised as upgrades. I don’t mind though.  A minivan is a major upgrade compared to our primary family transit: a 15-passenger Chevy that also doubles as our livestock transporter.

My job for the day was to assess the feasibility of a $60 million apartment development.  At first all the business Minnesotans were affable and kind in answering my questions and showing me around. But as the day wore on and the flurries got more serious, patience began to run thin.  Traffic was so bad in Uptown that I ditched the car and sloshed around by foot, wishing the whole time I was wearing Red Wing boots instead of Cole Haan loafers.

I kept thinking about my ancestors that had come from Sweden years ago.  They settled on a homestead in Minnesota.  Somehow they survived April blizzards without chainsaws and tractors, felling and cutting and splitting all that firewood before the age of hydrocarbons.

My trip was really a modern-day approximation of that struggle.  Eking out a living on the same frozen steppes.  But my day’s wages weren’t paid in small piles of sweat-soaked wood.  They were paid in silent, invisible electronic deposits instantly dispatched to buy lightbulbs, braces, bottled spring water and all the other modern wonders my ancestors never dreamed of buying.

Eight inches of snow gave the entire airport terminal the feeling of a Friday afternoon at the DMV: take a number Sir, kindly take a seat, you are going to be here for awhile, and good luck if you should have to use the restroom.  So I went to work felling voicemails, cutting up emails, and whacking away at all of those apartment projects.  It all felt inconclusive.  This needed more analysis.  That needed a conference call.  The other thing would require another 4:30am wake-up call and a flight to, thankfully, someplace warm.

After several more delays, two trips through the de-icer, and a stop for late night pizza I finally arrived home at 2:00am to find the old place lit up like the Plaza Hotel at Christmas.

I turned off all the lights and, just as I had done the night before, tip-toed across the creaky wooden floor, past my sleeping dominoes and found Alison sound asleep in bed, again hemmed in by toddlers and Matchbox cars.

Then I carefully slid under the covers without anyone even noticing, as silent and invisible as a direct-deposit paycheck.

It turns out that after 22 hours of work I didn’t smell like anything at all.

Ed note: as I get things up and running here I will be posting frequently, but sporadically.  If you like what you’re reading please follow along so you can be alerted of future posts.  I will eventually get into a regular weekly schedule.

3 responses to “The Smell of Work”