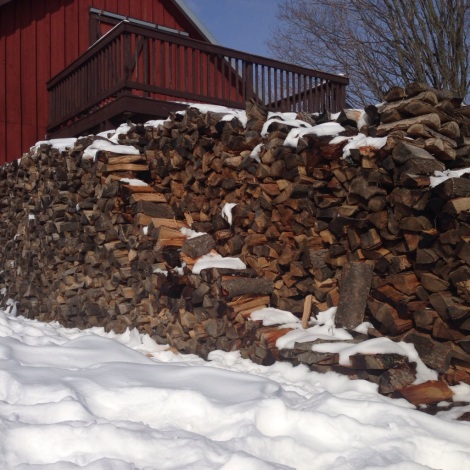 I clattered around the kitchen to the washboard beat of a Johnny Cash playlist, scratching crusted butternut squash soup and quesadilla remains from a pile of pots and skillets. The stains from leftover dinner proved considerably more stubborn than the unusually tired batch of little kids I had extinguished with just two songs out of the old himnario.

The older boys came bursting in from evening chores, a long drag of icy late-winter air trailing in behind them. As is custom, they gave me their report. Chickens good, sheep good, goats good.  Everyone good. But the coyotes were out they said, and from the sounds of it, they were uncomfortably close to the barn, maybe just a few hundred feet beyond.  They sounded hungry, they said. Hungry for lamb.

I went out to take a look. It was a pristine and silvery black night, clear and crisp. Starry, with enough moon and snowcover to see out three-hundred yards. A lonely and brutal beauty.

The coyote yelping was indeed heart-stoppingly close. It amplified off that knee-deep sheet of snow and ice, rattled through my waxy ear canals, shot straight down my nervous system, across a billion synapses, and settled deep down into my terrified chest.  Every last strand of hair on my neck – of which I am blessed with many – bristled, shrinking my shirt by a full two sizes.  Indeed, those yappers were close enough to smell the frayed nerves of a flock of terrified sheep.

The honest truth is that coyotes are no more of a threat to my livelihood than are the mosquitoes. For now at least the global capital markets have much more to do with it. Fisticuffs in hotspots 6,000 miles distant can do a lot more damage than a hungry pack of coyotes 60 yards away.

Still those harrowing sounds triggered something in my brain, something long since shrunken from all those years of air conditioning, business class upgrades, and excursions to Costco. The residue of suburban domestication is not easily rinsed, but the classic man vs. beast scenario aroused a simple reflex: to protect my herd, to protect my family.

I’ve never really been one to punch anyone, and lo these years on the farm I have been resistant to shoot much of anything either.  We have outsourced our occasional issues to neighbors or butchers. But as we have grown into our life here amidst this natural animal reality, I know that we have been cheating the odds.

So last year I broke down, went out and bought a 20 gauge shotgun. My father-in-law gifted me a .22.  I shot them at the range, got them both good and calibrated, and then stored them away. Shooting at something other than a target remained still just hypothesis. Killing an animal in cold blood nothing more than theory.

All of this rippled through my mind as I hurriedly crunched over hardened snow and into the workshop. I bypassed the hot manic fury of the deer rifle for the gentle tink of the .22, wondering the whole time if the thing would even do the job.  There may have been some trepidation in that choice. It would take a perfect shot to down a coyote at 60 yards with the .22, but maybe that was the point in choosing it.

I scrambled up to the second floor deck where I could get a great view of the property, including the hinterlands beyond the barn.

Through my scope I scanned the darkened fringes of brush, but saw no signs. It’s hard to believe that in a few short months everything will once again come to life. Bullfrogs in the pond, crickets in the grapes, peepers on the night shift. The whole landscape teeming with green, the constant need to graze and mow. After a winter like this one you get to wondering whether anything will ever grow again.  You forget that in just a few short months – after you’ve soaked through three t-shirts, after the lemonade has run dry, and when those bales feel like five hundred pounds apiece – you’ll be pining for twenty degrees again.

My grip on the gun was vice-like, my pulse quickened, the black weatherproof stock cool against my palms. The seven shot magazine was fully-loaded, the bolt action ready.  The .22 is really a glorified BB gun, but it may as well have been a bazooka to me up there on my perch.

All of my senses were heightened.  I heard the quiet periodic muttering of distant watchdogs, hooting from a lonely owl, and the drone of the last flight in from Chicago or maybe Minneapolis several thousand feet up.

I am no prude, and I am under no illusions. I have felt the weight of dead animal carcass, wiped blood from thawing steaks, heard the metallic thud and then saw the black angus hoisted to the rafters. I realize that if I really want to know – and not just to know as a menu factoid, but to really truly know –  where the lamb and the chicken, the bacon and the beef, the venison and the sausage to feed our family come from, I’m going to have to get comfortable with the bullets and the knives, with the blood and death.  I’m going to have to step out of the cellophane-wrapped fantasy I’ve been living in almost my entire adult life and into something considerably less cozy.

But it wasn’t to be on that night. The yipping slowly retreated deeper and deeper into the wilderness, further and further distant from our flock, off looking for something else, maybe a white tail or a family of rabbits.

I eased off the trigger. Sorry Mr. and Mrs. Coyote, I whispered, no offense.

Just taking care of my flock. That’s all. Just trying to feed my family.

Somewhere in the darkened snowbound forest Mr. and Mrs. Coyote howled the same exact thing back to me.